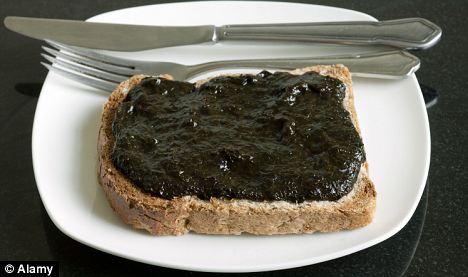 Filling: The seaweed was actually ground up and mixed with bread to make a filling toast for the study

Eating a slice of bread baked with ground-up seaweed could help you feel fuller for longer, researchers have found.

Men fed the speckled toast consumed 179 fewer calories on average than those given a slice of wholemeal – the same amount as you would burn during a half hour session on the treadmill.

The tests at Sheffield Hallam University were the first to involve adding the entire seaweed plant to the bread mix rather than breaking it down to extract various chemicals.

The bread – served with the crusts cut off – did not include any salt with the seaweed acting as a total replacement.

None of the men could tell the difference between an ordinary loaf and the slices seasoned with seaweed – which has a similar taste but far lower sodium levels.

As well as cutting salt intake, the seaweed also acted a bulking agent so the men felt fuller and less hungry.

So when the 12 men were presented with as many 400g bowls of pasta and tomato based sauce as they could eat for lunch some drew the line after a couple of bowls.

The seaweed was sourced from the Scottish Outer Hebrides. Dr Craig Rose from The Seaweed Foundation which supported the study, said: ‘It is not as salty as normal bread but you don’t notice any marine flavours and it is very acceptable.

‘It has far more minerals than any land plant. It tastes minerally and works flavour wise.’

The test panel was split into two and given either egg on brown bread or enriched bread.

Researchers from Sheffield’s Centre for Food Innovation checked how much they ate and blood pressure levels. They found the men fed the seaweed bread consumed 179 less calories in a day, with 100 calories being significant for weight loss.

Dr Rose added: ‘This is the first time that this has looked at the using the whole seaweed as a food. All that has happened is it has been dried and milled.

‘Other works have looked at extracting chemical s from the seaweed and using them. So this study is very important in using whole seaweed to provide all the benefits. There is also on-going research showing it increases the shelf life of product.

‘The seaweed acts a bulking agent in the stomach giving a feeling of fullness. It has sodium in low levels but far less than salt.

‘It is also natural, sustainable, organic and adds nutrition. So unlike most bulking agents it is not just filling something out for the sake of cheapness.’

Lecturer in nutrition Anna Hall, who led the study, said: ‘I tried the bread and really like it. It does look a bit different to normal wholemeal.

‘The seaweed is fine granules so the bread looks a bit speckled but it tastes very nice.’

Previous research has looked at using seaweed as a salt substitute with pasta. As well as using it in bread the university is also investigating applying the principle to a range of meat products including sausages, Professor Hall said.