Archive for the ‘Uncategorized’ Category

SINGAPORE: The rich history of the former medical hostel at 11 Mandalay Road has been documented in a book.

The building, which boasts of Palladian-style architecture, now stands as the headquarters of the Lee Kong Chian School of Medicine – a joint medical school by the Nanyang Technological University (NTU) and Imperial College London.

Prof Andersson added: “This house is not so well-known in Singapore but it’s the same calibre as the Istana, the Raffles Hotel; it has the same type of architecture. It housed many of the senior doctors and nurses in Singapore.

“This is where the people who studied healthcare – doctors or nurses – lived until the end of the 1990s. I think that is part of the important history in the healthcare of Singapore and, as I said, this now becomes the new headquarters for the new medical school. I think it is very symbolic. This book is a good present to Singapore for its upcoming 50 years.”

The book details the building’s transformation through the past 90 years, as told by the personal stories of its former occupants. It also features about 100 photographs, including rare photographs from the late 1940s depicting students at the hostel.

Mdm Wong Mee Yee, a former hostel resident, said: “I was a home staff here, looking after the nurses, and I stayed here for a couple of years. I was very happy and I had a big family and we celebrated each other’s birthday in the hostel.”

The building was first constructed in 1924 as the Straits Settlements Mandalay Road Hostel for senior medical students. Apart from a brief hiatus during a World War 2, the hostel was used by medical students for three decades, becoming part of the University of Malaya during the latter years.

The building – adjacent to Tan Tock Seng Hospital in the Moulmein area – was left vacant for 11 years, before it was selected as a site for NTU’s new medical school in 2010. Restoration works began in 2012. 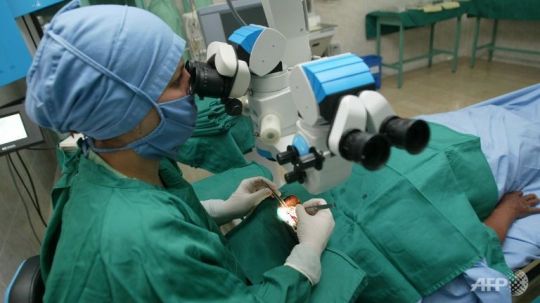 SINGAPORE: Six out of 10 families approached by the Singapore Eye Bank gave their consent for corneas to be harvested from their loved ones.

The Singapore Eye Bank hopes to boost this figure further as it sees a growing list of patients suffering from corneal blindness. But doctors say more needs to be done to raise awareness on organ donation.

Seeing through a damaged cornea is like looking through very foggy spectacles, which is what patients with corneal blindness live with daily.

But there are often challenges faced in the local cornea donation process. “The main problem that we see in the family members is that they didn’t really know what their loved one would have wanted,” said Professor Donald, medical director of the Singapore Eye Bank and senior consultant ophthalmologist at the Singapore National Eye Centre.

“It’s very easy in those family in which they have already discussed it and the person who has passed away has actually expressed that they are either pro-eye donation or not.”

A poll of families by the Singapore Eye Bank found that less than 10 per cent of them know if their loved ones want their organs donated.

It took Mr and Mrs Lim by surprise when their son, Jordan, told them he wanted to be an organ donor. Jordan was diagnosed with cancer at the age of 12. Despite recovering after chemotherapy, he had a relapse in 2013.

“Out of the blue, he just said ‘I want to donate my organs’,” said Mrs Lim Hui Kheng, Jordan’s mother. “And at that point I was telling him the disease had spread to all his organs … nobody could use them.”

But Mr and Mrs Lim found out their son was eligible for cornea donation, news they said made him very happy. In Oct 2014, Jordan died at the age of 18. His cornea was used to help two patients suffering from eye diseases.

“For some families, it can be a taboo subject but it brings a lot of happy memories to know that during our discussion, we talked about this and we can assure one another that this is really what he wanted,” said Mr Lim Meng Kwang, Jordan’s father.

To further raise awareness on the importance of organ donation, the Singapore Eye Bank is pushing for the topic to be better fleshed out in the medical school curriculum.