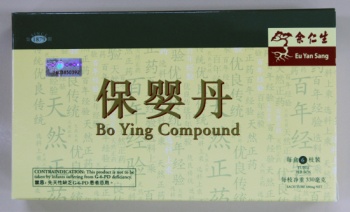 A locally available version of the product currently at the centre of scrutiny.

PETALING JAYA: A local Chinese medicine chain has said it will not remove one of its products, Bo Ying Compound, from shelves as it has not received any directive to do so.

Following news circulating on social media that the product contains high levels of lead, Eu Yan Sang Group senior manager Wong Kah Cane told theSun that the group had not received any directive to withdraw the product from the market as the US Food and Drug Administration is still conducting investigations on the matter.

“However, I wish to stress that it is still unknown whether the product that tested positive for excessive lead is the actual Hong Kong Bo Ying Compound product or a fake.

“This is because we have never exported any Hong Kong Bo Ying Compound to US, so how is it possible for them to ban something that is not being exported there?” he said, adding that all their products are produced locally and comply with all the safety requirements set by the respective health departments.

Wong further pointed out that the Hong Kong Bo Ying Compound is produced there and its manufacturing facility in Hong Kong has obtained all the relevant certificates and accreditation from the government there.

Asked if the Malaysia Bo Ying Compound is safe for consumption, Wong said that the product is manufactured locally and is safe, and that there is a slight difference in terms of its formulation as compared to the Hong Kong version.

“We wish to assure our consumers that all Eu Yan Sang products adhere to the Chinese medicine regulations imposed by the regulatory authorities in the country of origin.

“(As such), every batch of product meets the safety and quality standards for proprietary Chinese medicine set by the local health regulating bodies,” he added.

Wong revealed that the manufacturing facility in Malaysia had obtained GMP certification since 1997 and ISO9001 international accreditation 2001 to ensure all products at the facility comply with the stringent safety and quality assurance standards.

On identifying counterfeit products in Malaysia, Wong said: “The consumer can do so by looking at the product registration number or they can always check it with the Health Ministry’s website to verify the authenticity of the product.”

via Our products are safe, says Eu Yan Sang | theSundaily.

KUALA LUMPUR: Soy sauce, toothpaste, butter, egg white and salt – these are just some of the things that ill-informed parents apply to burns suffered by their children.

“Parents often don’t know what to do when children are burnt or scalded and apply things which make it worse,” said Dr Mohd Yusof Abdullah, a paediatric surgeon at Hospital Kuala Lumpur’s Burn Unit.

He said administering unsterile substances could infect the wound.

“We have seen burns made worse by the application of home remedies, resulting in the cases needing surgery,” he said at the 3rd HKL Burn Seminar yesterday.

Ice should not be used as extreme cold can cause hypothermia.

Burns are the 11th leading cause of child deaths, with those four years old and below at the greatest risk.

“Parents must supervise and monitor their children closely. Most child burn cases are preventable,” he said, adding that serious burns could take up to six months to heal.

case studies mentioned by Dr Mohd Yusof included a child who touched an electrical wire atop a commuter train, resulting in 70% of his body covered with burns.

Another involved a child who played with matches and started a fire that claimed his father’s life and left him with burns on 45% of his body.

“It is sad dealing with children, especially when changing their dressings,” he said.

“I hope more units will be opened at hospitals nationwide due to the increase in outpatients for burns,” he said.

via When ‘remedies’ make things worse – Nation | The Star Online.

WEB To PDF
(4.5 stars with 766 Ratings)
Universal App
→Free for a limited time

We have featured other web page to PDF apps before, but WEB to PDF is a powerful PDF creation app with lots of useful features other apps simply don’t offer.

With Web to PDF you can easily create a PDF from an URL you enter on the address bar. However, the best features of Web to PDF are its reading, editing, and storage options. Instead of scrolling downwards to view the entire PDF, this app lets you view your PDF one page at a time. You can swipe left or right at the screen to turn pages, giving it an ebook feel. This app also lets you edit directly on the PDF file you have created. Add text or handwritten notes directly on the PDF using this app.

You also have the option to rearrange pages just by dragging each page to your desired position. Finally, this app also lets you upload your PDF files to Dropbox or send your PDFs via email so you can easily access them from anywhere.

via WEB To PDF: Web Page to PDF Creation App With Tons of Features | App Saga. 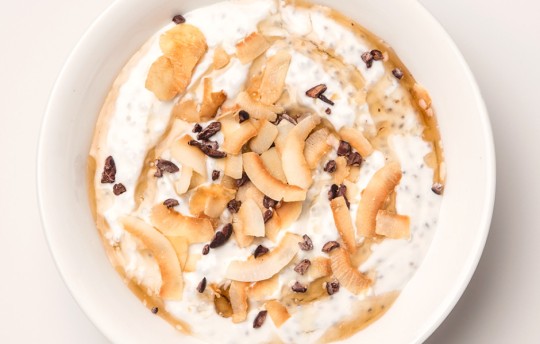 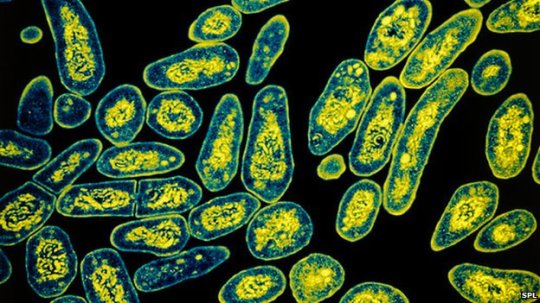 Researchers have developed the first breath test for TB in the laboratory.

It provides rapid information on drug resistance that takes up to six weeks using standard methods, US scientists report in the journal, Nature Communications.

The bacteria emit a unique gas signature within 10 minutes of exposure to an inhaled antibiotic in rabbits.

Early diagnosis and treatment are a priority in the global fight against TB, according to the World Health Organization.

Optimally treating somebody the best you can at the time of that single encounter, so someone can go home with the right set of tablets, would be really, really useful”

Dr Graham TimminAssociate Professor at the University of New Mexico

The new research used an inhaled form of isoniazid – an antibiotic commonly used to treat the disease – which is activated by a TB enzyme.

The test exploits the fact that this enzyme is unique to TB, said Dr Graham Timmins, Associate Professor at the University of New Mexico, US, who led the research.

“We realised that we could actually look at the conversion of isoniazid to its active form by monitoring one of the labelled gases that’s given off during its activation,” he explained.

The researchers gave a special molecularly-labelled form of isoniazid to laboratory rabbits.

In the presence of TB, labelled nitrogen gas was released from the lungs and detected by a machine called a mass spectrometer.

A positive result indicates that TB bugs are present and suggests they are susceptible to isoniazid.

TB is very difficult to treat, requiring at least six months of treatment with multiple drugs.

Failure to complete treatment has contributed to the rise of multidrug-resistant TB (MDR-TB), accounting for 30% of cases in some countries.

For many years diagnosis of TB relied on a lengthy wait for the bacteria to grow in a culture of the patient’s sputum.

“If you do it by culture, it can take a month to six weeks before you get a result,” said Dr Timmins.

In the last few years a new DNA detection technique called GeneXpert has been endorsed by the World Health Organization.

From a sample of sputum it can detect whether a sample contains TB and whether it is is resistant to one of the key drugs, rifampicin, in about three hours.

But for full drug resistance information the patient has to wait longer.

“Optimally treating somebody the best you can at the time of that single encounter, so someone can go home with the right set of tablets, would be really, really useful,” said Dr Timmins.

The new breath test samples the whole lung for what is hoped will be greater sensitivity, in a wider range of patients, with results available almost instantly.

The test could “add a bit more certainty” to the diagnosis of MDR-TB, and “it’s worth pursuing, definitely,” she said.

At present the breath test only detects isoniazid sensitivity. It will therefore need to be used in combination with other tests.

“This is just the start of the program we want to instigate,” said Dr Timmins.

The next step will be to show that the tests work in humans in a clinical setting.

“Lots of good ideas fail when you put them into the clinic,” conceded Dr Timmins.

Eye surgeons in Mali travel long distances in extreme heat on motorbikes visiting remote villages to try and eliminate one of the leading causes of preventable blindness.

They go from village to village and treat anyone with the advanced stages of trachoma, a bacterial infection, before it causes irreversible blindness. Trachoma is common in children and the women who care for them. It is infectious and is spread by coming into direct contact with the discharge produced from the eyes or nose of an infected person through contaminated objects such as towels. Flies also transfer the bacteria from the discharge.

The locally trained health workers upload their findings by mobile phone to a central system. They report the number of people they screen for the disease, the surgeries they carry out, and the number of follow-up consultations they provide.

Here in the remote village of N’Korobougou, in the western region of Koulikoro, Boubacar Fomba diagnoses a 68-year-old woman with trichiasis, the advanced stage of trachoma, where the infection has become so bad that the eyelashes have turned inwards, painfully scratching the eyeball with every blink. “I started having pain and itching there about 20 years ago,” says Kany Doumbia, who earns a living through agriculture and gardening.

Mr Fomba is part of a team working on a Sightsavers project to tackle a backlog of advanced cases in Mali. It is hoped that the disease can be eliminated in the West African nation by the end of next year – an aim made possible largely thanks to a multi-million dollar donation by the Conrad N Hilton Foundation.

The 10 surgeons in the team work across 10 different districts, each covering between 20km (12 miles) and 30km a day and conducting at least three operations each day. Poor communities in hot and dusty climates – where access to water is poor – are most affected by the disease.

During surgery the eyelid is rotated outwards, directing the eyelashes away from the eyeball – a procedure that takes as little as 10 minutes. Globally an estimated 8 million people suffer from the advanced stages of the disease and require surgery to prevent them from going blind. In Mali, an estimated 25,000 people need surgery before elimination is reached. The prevalence of the disease amongst children under nine has dropped to below 5%.

After the surgery, Ms Doumbia said she felt a real change because the pain she used to have had gone – and she was relieved that she would be able to continue to sell her garden produce in the nearest city, Ouelessebougou. “I had started to fear losing my sight because the pain became frequent and often my vision was blurred,” she said.

“We consult dozens of people per day,” Mr Fomba says. “And people come to us because they were recommended by other patients. That makes us feel proud.” Antibiotics are also prescribed to treat the infections – and the surgeons explain that facial cleanliness is one of the best ways to prevent the spread of the bacteria.

In the afternoon, each motorbike surgeon sets off for the next village where they will spend the night – so that another day of examinations and operations can begin early the next morning. Gallery by Javier Acebal for Sightsavers.

Brazilian researchers in Rio de Janeiro have released thousands of mosquitoes infected with a bacteria that suppresses Dengue fever.

The hope is they will multiply, breed and become the majority of mosquitoes, thus reducing cases of the disease.

The initiative is part of a programme also taking place in Australia, Vietnam and Indonesia.