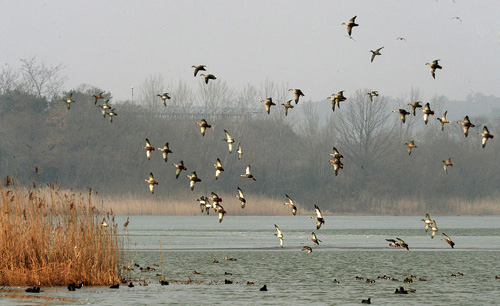 A virulent bird flu outbreak in North Jeolla Province, the fifth outbreak in the country, was caused by infected Baikal teals, making it likely that the migratory birds will spread the virus to other areas.

Health authorities are on full alert because the migratory birds, which stay in the region until February, will fly over the densely populated Seoul metropolitan area as they head north toward Russia in March.

Tests on Baikal teals found dead at a reservoir near the duck farm in Gochang where the virus broke out first, showed that they carried the H5N8 virus, the same strain found at the duck farm, the agriculture ministry said Monday.

The government concluded that they transmitted the virus through their feces.

The government blocked access to lakes and reservoirs around the Jeolla provinces where the Baikal teals are resting. It started disinfecting 37 wintering sites of migratory birds.

Some 139,000 chickens and ducks raised at 10 farms in Gochang and Buan were culled and buried between Friday and Monday.

The ministry terminated a 48-hour standstill order for the Jeolla provincial areas after 48 hours on Monday night since there are no more sign of the disease spreading further.

Parents with autistic children should not shy away: Rosmah