A week ago, Calendars+ was made available for free by Readdle. Now, though, the app has been pulled from the App Store. In its stead is Readdle’s new flagship calendar app, Calendars 5.

Available as a universal iOS app, Calendars 5 is touted as the first smart calendar for iPad. “Its large screen is great for managing your daily schedule and enables richer interaction with your calendar,” says Readdle.

If you can’t see the video embedded above, please click here.

Other key features of Calendars 5 include:

Compatible with iPhone, iPod touch, and iPad running iOS 6.0 or later, Calendars 5 is available now in the App Store $4.99.

Note that Calendars 5, like the newly released Reeder 2, is a separate app. Existing users of Calendars+ may not upgrade to the new app for free.

2 sprigs thyme plus leaves for serving

2 sprigs rosemary plus leaves for serving

The era of NHS patients being shunted around hospitals needs to end, an expert group says.

The Future Hospital Commission – set up by the Royal College of Physicians – said a radical revamp in structures was needed to bring care to the patient.

This was particularly true for frail people with complex needs, who often faced multiple moves once admitted to hospital, the report said.

It also recommended closer working with teams in the community.

The commission said this could involve doctors and nurses running clinics in the community and even visiting people in their own homes – as is already happening in a few places.

It also called for an end to the concept of hospitals discharging patients.

Sir Mike Rawlins: “Hospital shouldn’t stop at the walls of the building”

Instead, it argued that many of those seen in hospitals in the 21st Century needed ongoing care that did not end when they left hospital.

So the report recommended that planning for post-hospital care should happen as soon as someone is admitted.

Key to that will be a new hub that should be created in every hospital, called a clinical co-ordination centre, which would act as a central control room, helping to ensure information about patients is shared and their care planned properly.

Once in hospital, patients should not move beds unless their care demanded it, the report said.

That contrasts with the multiple moves many patients with complex conditions often find themselves facing as they are passed from specialism to specialism.

It said this would require a greater emphasis on general wards with specialists visiting patients rather than the other way round.

The longest Suzie Hughes, who has the auto-immune condition Lupus, has spent in hospital is 21 days.

During her stay, she was moved five times for non-clinical reasons.

“I would find myself being wheeled down the corridor with my flowers and chocolates. Nurses would be with me and I kept thinking, ‘What a waste of their time.’

“And each time I arrived on a new ward I had to explain my condition again. The information does not get passed on and it results in delays.”

The authors – drawn from across the NHS and social-care spectrum – also called for an end to the two-tier weekday and weekend service in many facilities.

They even said it would be preferable to work at 80% capacity across the seven days if extra resources were not available in the short-term.

“We need nothing less than a revolution… in order to ensure our NHS is fit for the future,” he added.

“I agree completely that we must make services more patient-centred both inside and outside hospital.”

Shadow health secretary Andy Burnham said: “We must turn this system around and help support people where they want to be – at home with their family around them.”

via BBC News – NHS patients ‘should not face constant moves’. 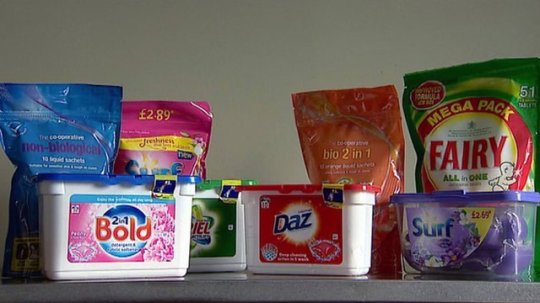 Free cupboard-catches are to be given to families in the Glasgow area with a three or four-month-old child in an effort to curb liquitab poisonings.

NHS Greater Glasgow and Clyde is worried about a continuing rise in the number of children being harmed after biting the brightly coloured capsules.

Doctors in Glasgow first highlighted the dangers of the gel laundry capsules last year after a spate of admissions.

Consultant Haytham Kubba said the problem had not gone away.

The paediatrician, who works at Glasgow’s Royal Hospital for Sick Children at Yorkhill, said: “Unfortunately we’ve had another three cases through intensive care this year.

“We have seen a lot more cases since we first raised the alarm a year ago.”

A recent survey by the UK’s National Poisons Information Service revealed there had been 1,486 cases involving the capsules between May 2009 and July 2012 – the vast majority involving children under the age of five.

Four children had breathing difficulties, one had a burned airway and four needed a ventilator to help them to breathe.

Eva Turner, a 15 month old, was one of the lucky ones. “I don’t think she swallowed a lot of it but she was sick straight away,” said her mum, Juliet Turner.

“I had read about the dangers of liquitabs so I brought her straight to Yorkhill. She was kept in overnight for observation and was fine but it’s quite scary to think what could have happened if she’d taken too much.

“It was on a shelf in a utility room and the box they were in had a click-lid on it which I didn’t think she’d be able to open, but she did.”

Health visitors from Greater Glasgow and Clyde Health Board will now hand out 16,000 cupboard catches.

Community safety development officer for the Royal Society for the Prevention of Accidents, Carlene McAvoy, said: “For us the most important part of the campaign is actually the leaflet which is being handed out.

“There’s a cupboard catch for people to put on their cupboards if they want to. These are child resistant, they’re not child-proof. The main thing is to be aware of the issue.”

The manufacturers of gel capsules have now agreed to change their packaging but it will take some time for all brands to comply.

By the end of the year they will be packaged in opaque boxes with child resistant openers and prominent warnings, in a voluntary scheme proposed by the UK Cleaning Products Industry Association (UKCPI).

Philip Malpass, the director general of the UKCPI said: “In addition, manufacturers are working with the authorities to monitor any further incidents and are carrying out regional public awareness campaigns that will be rolled out across the UK.

“We believe these measures will reduce incidents but should not rule out the vital role that parents have to play when using the products as directed and to keep them out of reach of infants when not in use.”

Mr Kubba said he was “heartened” by the changes adopted by the industry but also stressed that the most important thing was for parents to lock liquitabs away.

“The reality is that these things are very concentrated and they are surprisingly dangerous,” he said.

“I was surprised at how dangerous they can be. We’ve had nine children though our intensive care in the last few years, which is nine seriously injured children who need to be on a ventilator to help them breathe.

“One of those children needed reconstructive surgery to their voicebox and windpipe.”

Earlier this summer the charity Children in Wales produced posters urging parents to “lock up your liquitabs” because of an increasing number of poisonings there.

NHS staff who want to raise concerns about patient care are to be assisted with new guidelines issued by the Nursing and Midwifery Council (NMC).

Nurse Helene Donnelly, who turned whistle-blower to expose failings in care at Stafford Hospital in 2007 and 2008, has backed the guidance.

She said health organisations “needed to do more” to enable nurses to deal with any worries they had.

The NMC has made the guidelines available on its website.

It said the document provides additional resources for people who wanted to raise concerns, including information on organisations that could give “advice and support on how to take matters forward.”

‘Responsibility to speak out’

NMC chief executive Jackie Smith said: “We want a health and social care sector where all staff can raise concerns without fear of reprisals.

Ms Donnelly, who gave evidence at the Stafford Hospital public inquiry in 2011, worked for six years in the hospital’s accident and emergency department.

The inquiry looked at the reasons why failings in care were missed at the hospital.

She currently works as the ambassador for cultural change at Staffordshire and Stoke-on-Trent Partnership Trust, where she is a community nurse.

She said: “I want to encourage nurses and midwives to understand their own professional responsibility to speak out when they have concerns about standards of care.

“But there is much more that organisations need to do to make raising and dealing with concerns more straightforward.”