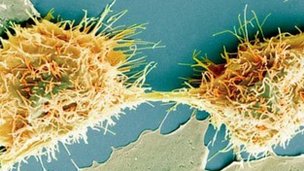 Cells from a cancer line known as HeLa

The first volume of a “book of cancer knowledge” has been published, which scientists say will speed up the search for new cancer drugs.

The “encyclopaedia” details how hundreds of different cancer cells respond to anti-cancer agents.

UK, US and European researchers say the data, published in Nature, is a step towards tailoring cancer medicine to a patient’s genetic profile.

A cancer charity said the work would help in testing new cancer drugs.

Cancer cells grown in the laboratory are an essential tool in cancer research.

Hundreds of different cell lines exist, allowing scientists to study the effect of new cancer drugs on the human body.

Now, a team at the Wellcome Trust Sanger Institute near Cambridge and various cancer institutes around the world have released two papers cataloguing data on hundreds of cancer cell lines.

The UK team, working with colleagues in the US, Paris and Switzerland, screened more than 600 cancer cell lines with 130 drugs, identifying genetic signatures linked with drug sensitivity.

Already clues are emerging that could be of benefit to patients, including the discovery that a rare bone cancer in children (Ewing’s sarcoma) appears to be vulnerable to certain drugs.

Dr Mathew Garnett of the Sanger Institute is lead researcher on one of the two papers published in the journal Nature.

He told the BBC: “It’s bringing together two very large and very powerful data sets and asking which cell line is the most sensitive and what is behind that sensitivity.

“This is the largest study of its kind linking drug response with genetic markers. You need these very large studies to identify small subsets of cells that are sensitive to drugs.”

Dr Levi Garraway of The Broad Institute of Harvard and MIT, Cambridge, US, is a senior member of the research team behind the second paper, which profiled 24 drugs across nearly 500 cell lines.

He told the BBC: “Developing this large cell-line resource with all the associated genetic details is another piece in the pie to get us to our goal of personalised cancer medicine.

“We’re trying to get smarter about understanding what the right drug is using the genetic information in each tumour. This is a stepping stone along the way.”

The next step is use the information to help decide on tailored treatments for cancer patients.

This would involve getting a genetic “fingerprint” of their tumour, which could be matched to information in the database.

Some cancer drugs are already available for individuals with a certain genetic makeup.

The best known is Herceptin, a breast cancer drug that works in patients with an overactive HER2 gene.

He added: “This new resource will help speed up cancer research and may well begin to guide further developments in personalised cancer medicine.”